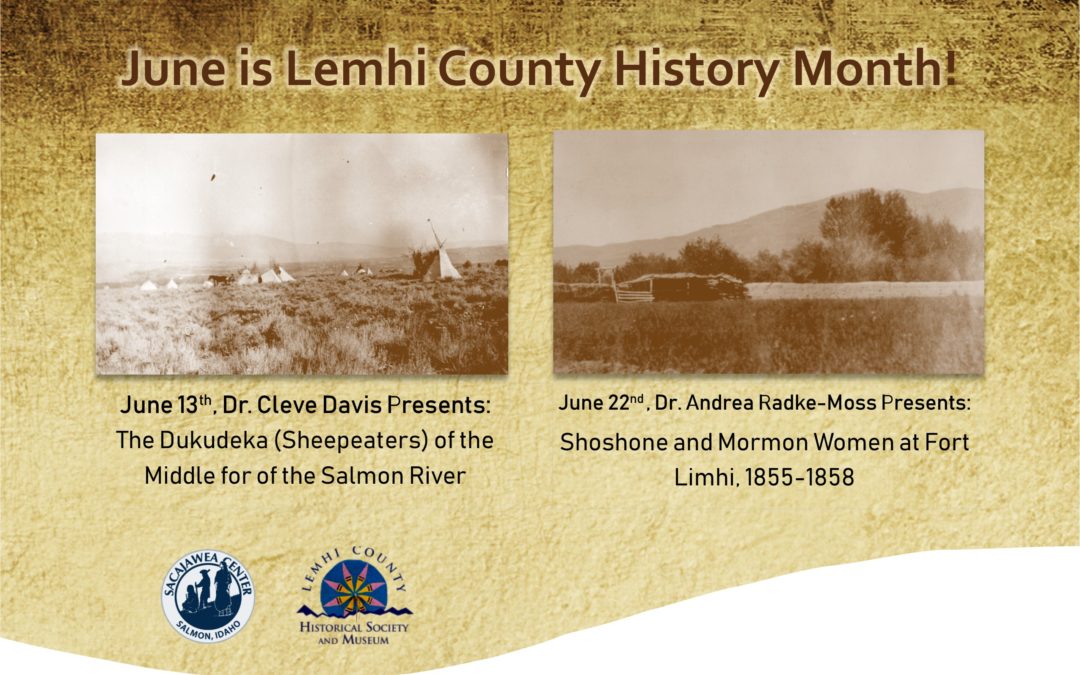 For several years the Lemhi County Historical Society and Museum and the Sacajawea Center have been teaming up to bring History Month to the community during the month of June. This year we host two experts on the Dukudeka (Sheepeater) and Fort Limhi history.

On June 13th Dr. Cleve Davis will be presenting, “The Dukudeka.” He explains, “This presentation will focus upon the research that was completed as an interpretative and educational poster on the Dukudeka, the “Sheepeaters”, of the Middle Fork of the Salmon River. The poster was developed out of a class project for Native American History during the fall
semester of 2017 at Idaho State University. The objective of the project was to provide education about the Indigenous people known as the Dukudeka, and to increase awareness of Native American histories and cultures from a “Native American perspective”. The presentation will also answer questions about the language they spoke, how they survived, and what the Indian rock art panels mean. Other topics of discussion include archaeology, Shoshone group names, seasonal migrations, the 1879 Sheepeater Resistance, and where the Dukudeka are today.”

This program will be held at City Center (200 Main Street) at 7pm. It is free and open to the public. Light refreshments will be served.

Dr. Davis is currently an adjunct professor at Idaho State University and a member of the Shoshone-Bannock Tribes. He is a descendant of Chief Eagle Eye, the last non-reservation chief of the Northern Shoshone speaking Indigenous people who lived in central Idaho. Dr. Davis has taught the following courses at ISU: Native American History, Indigenous Peoples of Idaho, and Ethnobiology Americas and has been published in the Journal of Native Sciences and Indian Country Today. He currently lives on the Fort Hall Indian Reservation

On June 22nd Dr. Andrea Radke-Moss will be presenting “Shoshone and Mormon Women at Fort Limhi, 1855-1858.” She explains, “the presentation examines the roles and actions of Shoshone women and Mormon women during the missionizing and colonizing efforts of Latter-day Saint elders to the Agaidika (Salmoneater) and Bannock Shoshones from 1855 to 1858. Shoshone women were significant to the Shoshones’ acceptance and rejection of the new religion, and were also important to the social, economic, and sexual interactions between the two groups. Mormon women came as wives to the missionaries, but acted in the capacity as colonizing matrons to the Shoshone people.”

Our June 22nd program will be a field trip to Fort Limhi. The cost of the program is $35 per person and includes the presentation, transportation, and lunch. Preregistration is required (call 208.756.1188). During the field trip we will also travel to Chief Tendoy’s grave site and learn about the history of the Tendoy School from Jenny Banta during lunch.

Dr. Radke-Moss is a professor of history at Brigham Young University-Idaho, where she teaches classes in U.S. women’s history and the history of the American West. She received her PhD in U.S. history at the University of Nebraska-Lincoln in 2002 and has taught at BYU-Idaho in Rexburg since 2004.  Her book, “Bright Epoch: Women & Coeducation in the American West” was published by the University of Nebraska Press in 2008.  She has researched and published on many areas of women’s west history, including schoolteaching and homesteading, suffrage activism, higher education, sexual violence, religious agency, and Mormon women’s activism. She is currently working on a history of Mormon women’s experiences in the Mormon-Missouri War of 1838 and a book-length history of western women’s activism and representation at the World’s Columbian Exposition, or Chicago World’s Fair of 1893

If you have questions about these programs or would like to sign up for the field trip please call 208.756.1188.